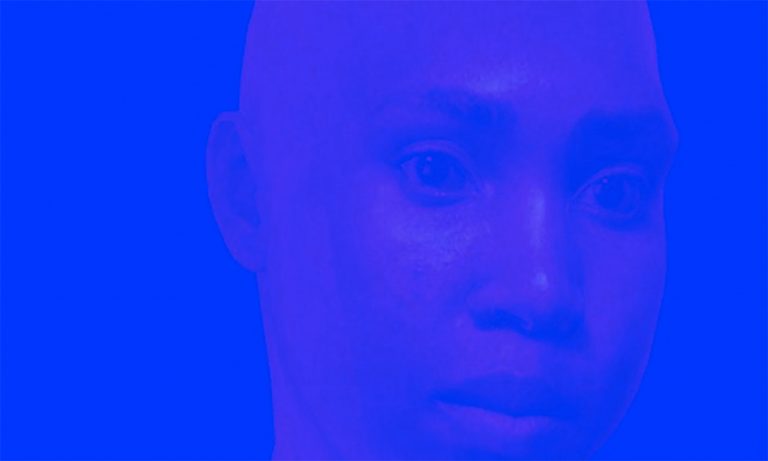 Sondra Perry, still from Graft and Ash for a Three-Monitor Workstation, 2016

At the entrance to the Serpentine Sackler Gallery, a wall of Yves Klein blue blocks the way. It opens the extensive, first European solo exhibition of the US-American artist Sondra Perry—and stands there silently and sublimely like a statement that cannot be sidestepped. Perry is referring here, however, not so much to monochromes in art history, but rather to the so-called blue box from film and television technology, in which individuals are captured as a sort of spatial copy template and can be inserted into any environment, space, or situation.

Past this opener of placelessness, the Perry universe is presented in a video projection of purple ocean waves that encompasses the space and enfolds the entire exhibition, cocooned in a dully wafting and ominous sound. Perry extracted the waves in a cut-out-like manner from William Turner’s painting “Slave Ship (Slavers Throwing Overboard the Dead and Dying, Typhoon Coming On)” of 1840, channeled them through the open-source software Blender, animated them, and adjusted the (in fact inaccurate) effect of the color tint in the process. Alone Turner’s title, which Perry adapted for her exhibition in a shortened form, reveals the political—historically as well as currently relevant—dimension before whose backdrop Perry works. As a young Afro-American artist (born in 1986), she examines the hundreds-of-years-old and ongoing discrimination against blackness, black feminism, and their interactions with and in capitalist societies in the best digital-native manner. She is part of a generation that has internalized the Internet and virtual worlds as an existing reality in addition to physical reality. This gives her the opportunity to dedicate herself to her themes within the “net realities” and, at the same time, to sovereignly incorporate a critique of the medium. All her works can be viewed online; Perry herself exclusively uses open-source software—and this is more a position than a pragmatic decision.